Carbon offset standards to date have applied a threshold-based approach to variables like offset additionality and other criteria. A project either is able to pass the threshold and become an offset, or it’s not. This is similar to the results of a criminal trial, which finds someone either innocent or guilty. They don’t find them “perhaps guilty” or “perhaps innocent”

There are three big problems with approaching offsets using a threshold approach to qualifying as a carbon offset.

This suggests another way to "fix" carbon offsets when it comes to assessing their additionality and overall quality as a climate change mitigation tool. What if we focused on evaluating how confident we are in the additionality, permanence, and lack of leakage associated with a ton, and turned that information into a “quality score” that can be communicated to the offset market. Since we can never be 100% sure about an offset's additionality (or lack thereof), why not communicate how sure we are and let purchasers decide whether they're comfortable with that confidence level?

How would such a scoring method work? On a 1 to 1000 scale, for example, a score of 900 would suggest a very high quality offset. A project that scores 200 stands a much lower chance of being a quality offset (it's not impossible, but it's much less likely than for the project scoring 900). A carbon offset buyer should be willing to pay more for the project that scores 900, and the market might on its own filter out projects that score 200. Not by disqualifying them through a least common denominator threshold test, but by offering a transparent look at how they perform against the agreed-upon criteria associated with carbon offset quality. 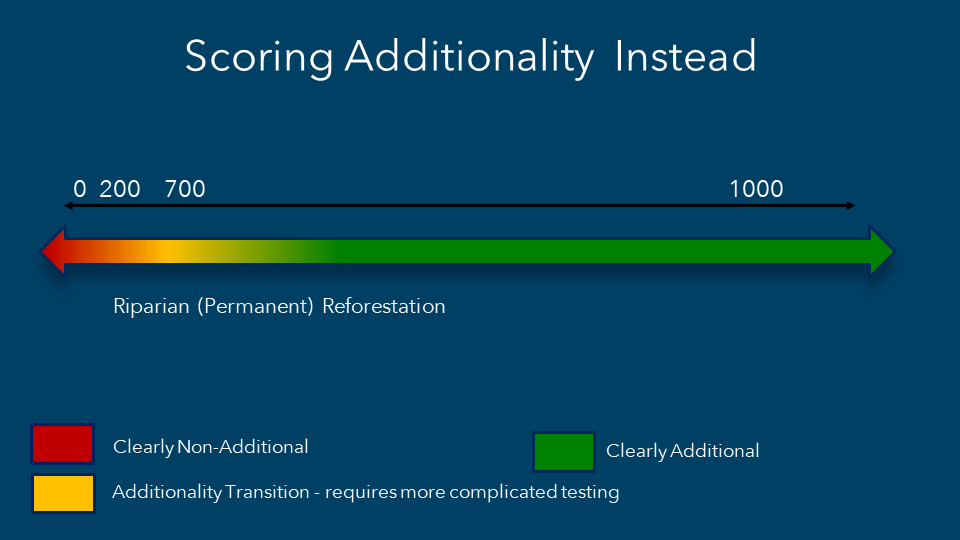 For regulated markets policy-makers could set the threshold for acceptable offsets at a specific level, perhaps require a minimum score of something like 700. Yes, moral hazard might cause projects that really should score 680 to receive a higher score (perhaps, say, 710). It would be very difficult, however, for a 400 score project to be scored at 700.

The graphic above shows how this scoring system applies to riparian reforestation, where many projects are likely to receive higher scores based on the underlying additionality continuum.

This second graphic shows that for energy efficiency, on the other hand, it would be more difficult to get a high score. Reflecting the reality that there are lots of reasons people are pursuing energy efficiency other than carbon markets. 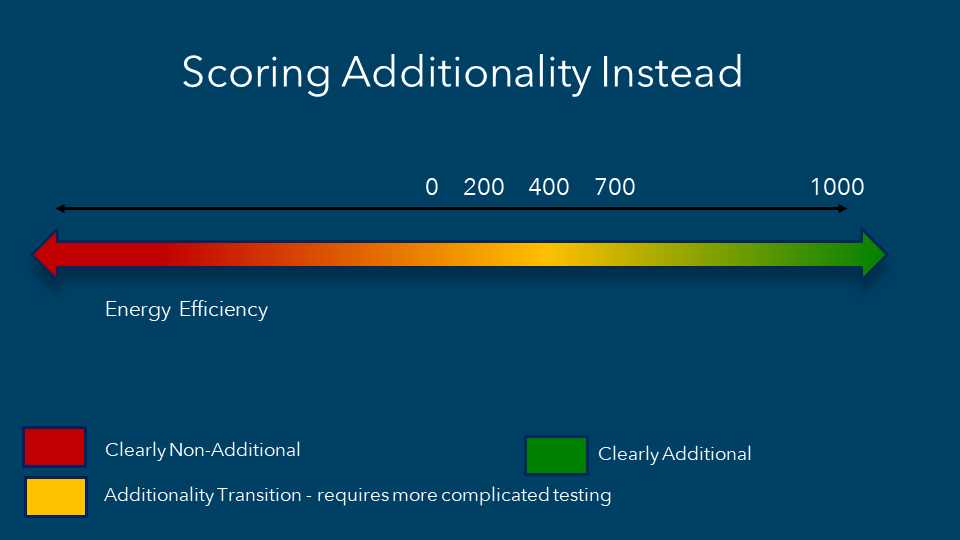 Such a scoring system was developed more than a decade ago, and demonstrated that the reliability of an offset “confidence score” will almost always be higher than the reliability of a threshold-based approval. One view of the spreadsheet used to implement the scoring system is provided below, although it does not include the detailed questions used to score the different variables shown in the spreadsheet, nor does it lay out the trick used to adequately weight the additionality criterion, without having it overwhelm all of the other criteria in the scoring process.

When the methodology was originally developed it was embraced by key players in the carbon trading firm for which it was developed, but was rejected by others over fears that too many projects of the firm's carbon offset projects would score quite low.

For a more in-depth White Paper exploring this scoring approach, contact us at info@climatographer.com .