From the beginning some critics focused on the ethics of offsets, comparing their purchase to the past practice of being able to purchase "indulgences" from the Catholic church in order to clear your sins. 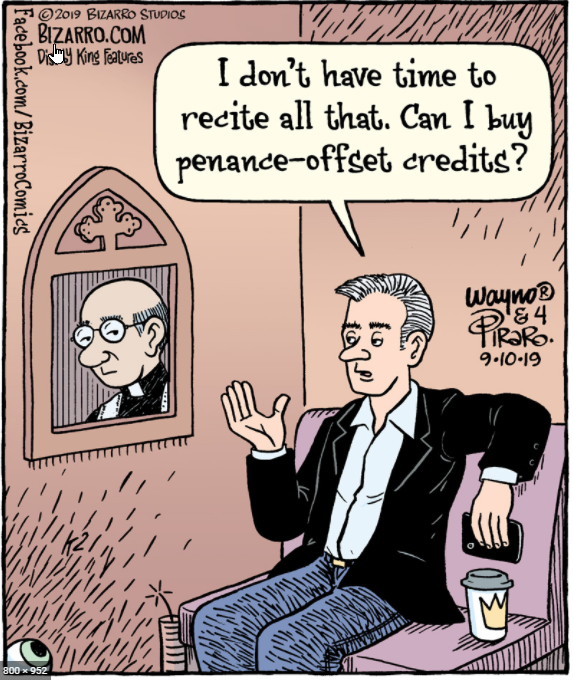 But a number of other critiques are also in play. Here we try to separate out some of the relevant conversations with the objective of helping advance the larger offset and climate change conversations.

A recent example of this argument can be found in this blog post which labels as “False” the statement that Products and travel can be “climate neutral” or even “climate positive. Products and travel that are sold as “climate neutral” or “climate positive” due to offsetting, do still have a carbon footprint. Such marketing is misleading and may even lead to more emissions as the offsetting incentivises increased consumption. We contribute more to climate solutions by consuming and travelling less.

The statement challenges the whole idea behind offsets. It suggests that even purchasing a high quality carbon offset that truly satisifies criteria including additionality, permanence, and leakage, and using it against a ton of CO2 you can’t avoid emitting for whatever reason, does not contribute to climate change mitigation.

In our view this line of argument throws the baby out with the bathwater. There are very good reasons to be rethinking the role of voluntary offset markets more than 30 years after they got started, but suggesting that even good offsets don’t deliver climate change benefit isn’t one of them.

Other concerns have been raised regarding the climate justice implications of carbon offsets:

There is a large literature that evaluates how voluntary (and regulatory) offset markets have performed, and the biggest critique of offsets relates to their environmental integrity. The environmental integrity of carbon offsets and carbon offset markets has primarily been a function of how the concept of “additionality” has been defined, interpreted, and implemented. That said, issues of “permanence” and “leakage” have also been quite contentious.

Critiques that we won’t explore in more depth here include:

Because the topics of additionality, permanence, and leakage have been such tought nuts to crack, and because technologists are interested in using things like Blockchain to tackle climate change, there is a growing story-line to the effect that fraud and double-counting have been much bigger problems than they actually have been. Fraud and double-counting are problems that Blockchain and other technologies could play a role in solving, as opposed to additionality, permanence, and leakage.

While examples can certainly be found of all three of these problems, they have been relatively minor problems in comparison to the others already mentioned. Downplaying the importance of the real challenges facing offset markets just because they don’t have technological solutions doesn’t contribute to climate change mitigation.

There is a substantive argument to be made that we have done such a poor job of implementing carbon offsets, primarily due to failing to ensure that markets are sufficiently additional, permanent, and without leakage, that we should think of voluntary offsets as a failed experiment and figure out how to move on. An intermediary approach would be to try something very different like an offset scoring system that would provide the market signals consumers need to differentiate between “high confidence” and “low confidence” offsets.

Voluntary carbon offsets got their start more than 30 years ago, when national and international climate policies were still just concepts. Voluntary offsets had two key attributes: 1) as a way for individuals and companies to demonstrate their concern over climate change, and 2) as a way to get companies onto the slippery slope of accepting and responding to climate change.

The currently proposed expansion of voluntary offset markets is associated with promoting the objectives of the 2015 Paris Agreement, which (at least rhetorically) limits average global temperature change to 2.0°C or even 1.5°C. But if countries are serious about achieving that target, far more of the world’s greenhouse gas sources and sinks will need to be targeted by policies and measures of one kind or another.

A strong case can be made that any global effort to achieve the 2015 Paris Agreement will basically strip voluntary carbon offset markets of supply. Given the breadth of the policies and measures required by the Paris Agreement targets, there simply won’t be enough gigatonnes of cost-effective emissions reductions and carbon removals “left over” to supply voluntary offset markets (with the potential exception of very expensive carbon removal and storage technologies).

If the expansion of voluntary offset markets is premised on the idea that countries will NOT actually take the necessary steps to achieve the Paris Agreement Targets, and that voluntary actions can take up the slack, a lot more analysis of whether such a role for voluntary actions is even plausible would be necessary. While it’s one thing to talk about “net zero” commitments for a few high profile companies, the idea that the business community as a whole will step in where policy makers have failed is a hypothesis will little supporting data at this point.

Note that the Task Force for Scaling Voluntary Carbon Markets has come up with disturbing option that directly links voluntary markets to the commitments countries have made to help achieve the Paris Agreement targets, potentially allowing countries to sell the reductions they’ve already committed to into the voluntary market. This raises a substantial additionality issue.

One reason there is such a focus on carbon offsets is that the message that companies and individuals need to reduce their carbon footprints has been so dominant. For decades now, companies concerned about climate change have focused on reducing their carbon footprints through actual internal reductions, through offsets, through “green energy” purchases, and other means. The same goes for individuals concerned about climate change. This focus on the primacy of footprint reductions has continued even though there is very little reason to assume that voluntary footprint reductions will have much of an impact on climate change or the climate risks facing companies and individuals.

More than a decade ago some observers started noting that companies concerned about climate change should start focusing less on the carbon footprints, and more on their “policy footprints.” A lot of focused work to communicate this message has been done by Influence Map, which coined the term “policy footprint.”

Rarely has this line of argument been specifically structured to pit offsets vs. policy advocacy, but that is indeed what the new group Giving Green does. Giving Green makes recommendations regarding carbon offsets, but ultimately suggests that where the focus of your giving should be is policy advocacy. It’s a powerful argument.

That said, it misses a big part of the picture when it comes to how individuals can support climate change mitigation. While some people have money to give, there are many other ways to deploy the time and expertise individuals can bring to the table. Learn more at the Individual Action Climate Site.

For an even bigger picture approach to tackling climate change in the most effective way possible, learn more about use the metaphor of Climate Chess to suggests a much more informed and collaborative approach to moving hundreds of climate chess pieces that are on the board. Learn more at the Climate Chess Climate Site.

We need to have serious conversations about carbon offsets, both with respect to voluntary and regulated offset markets. Those conversations will be a lot more productive if we can structure them in a way that best gets at the underlying question of “how can we best advance climate change mitigation goals?”

We hope this Climate Site can contribute to a more productive conversation. We’d welcome your feedback and suggestions (see paragraph below) and the page at right.